Attica’s cultural festivals… at a glance! 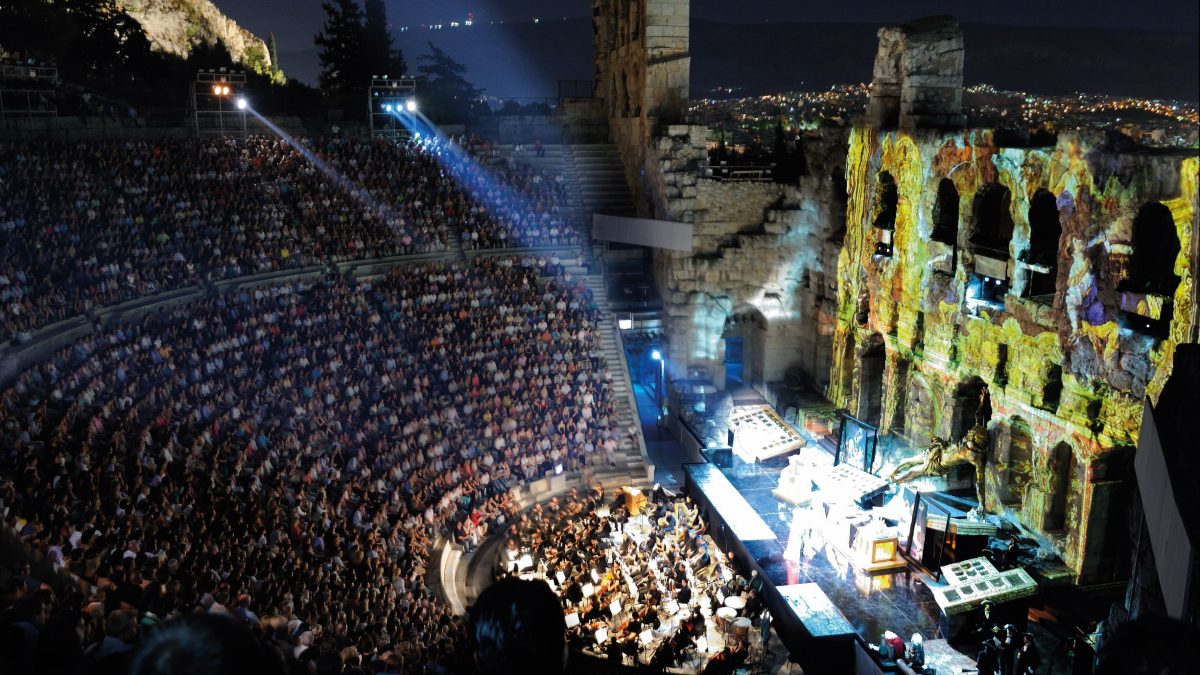 The journey to Attica becomes even more majestic when it is combined with a journey in culture and arts, with routes full of music notes, theatrical expression, cinema frames and motion! Every year, the cultural festivals that are organised all over Attica with the participation of top artists from around the world become the audience’s favourite meeting point, placing Attica on the international cultural and artistic map. Tour around the most important cultural events in Attica and make sure you book a seat in time, for this fascinating journey!

Every year, from June till the end of summer, the Athens & Epidaurus Festival hosts leading names of Greek and international arts in breathtaking music, theatre and dance performances that take place in iconic venues, such as the enchanting Odeon of Herodes Atticus under the Acropolis.

Then, towards the end of summer, the Aeschylia takes over, the Greek festival that has been awarded as one of the best Festivals in Europe. Theatrical and dance performances, music concerts, visual arts exhibitions, film screenings and more, in the city of Elefsina, 2021 European Capital of Culture.

A ten-day parade of art and culture is set up every year by the Petit Paris d’Athenes in a number of selected spots in the centre of Athens, while in June the Summer Nostos Festival welcomes visitors of all ages and interests at Stavros Niarchos Foundation Cultural Centre, for a week full of art, sports and education.

The Athens Biennale needs no introduction. Every two years, the pioneering international festival of contemporary art becomes the talk of the town, more than any other cultural event in Greece. Art Athina, one of the longest living contemporary art fairs in Europe, brings together Greek and international galleries, cultural institutions, collectors, art critics and the art loving audience.

Comic buffs from around the world, do not miss Comicdom Con Athens, the festival that features internationally acclaimed creators, original art exhibitions, sketch events, screenings, workshops and many more.https://www.appliedartsfestival.com/ If you are into not only comics but the whole spectrum of applied arts as well (illustration, caricature, graffiti, industrial design, photography, video games, graphic design, painting, animation) the Applied Arts Festival is the place to be!

Technology, art and science or all forms and trends of contemporary digital culture are presented every year at the international Athens Digital Arts Festival, while the yearly Athens Photo Festival welcomes artists and visitors from around the world, at the great celebration of photography and contemporary visual culture. Fast Forward Festival turns to the future and to new forms of art, with multiform and hybrid performances and installations, in unexpected spaces.

When summer begins, jazz artists from all over the world have a yearly appointment at the Athens Technopolis Jazz Festival, creating a wonderful atmosphere with enchanting melodies. Equally majestic is July full moon at the Technopolis, which is the perfect setting for the Full Moon Fiesta, a music celebration with Greek and foreign artists.

Town squares, streets, parks and several other spaces in Attica are flooded with mesmerising music tunes every June at the European Music Day, while musicians from all over the world get together with children from 0-12 years and their parents and become one big band at the Onassis Stegi and the Big Bang Festival, the European Music Festival for Kids.

Combine your holiday in Attica with a great music event, choosing from the many that are held here every year and host top artists of the international music scene. Enjoy your favourite singer or band at the Release Athens Festival that is held in Plateia Nerou, Faliro Olympic Complex right by the sea, at the Ejekt Festival or the Rockwave Festival that takes place in the lush green Terra Vibe Park, in Malakassa.

If you love electronic music, don’t miss the winter or summer version of Plissken Music Festival, the all-day experimental electronic music festival Electric Nights Music Festival as well as the ADD Festival that is held every May in different venues, from downtown Athens historical centre to the Attica Riviera.

A stunning garden theatre opposite the Acropolis, at the back of Philopappou Hill, becomes the yearly meeting point of dance fans, at the International Dance Festivals Anapale and Emmelia that are organised by “Dora Stratou” Dance Theatre. Every year the Arc For Dance Festival features a multitude of activities and performances of contemporary dance in Athens, while the Athens Video Dance Project hosts Greek and foreign dance films and documentaries, performances, performing arts workshops and a lot more.

Attica is a cinephile, and this is testified by the multitude of film festivals it hosts every year. Don’t miss the Athens International Film Festival, the greatest cinema celebration in the city that is consistently organised every September, or everyone’s favourite Athens Open Air Film Festival, from June until September: open-air screenings in parks, town squares, museum gardens, archaeological sites and summer cinemas!
The seventh art at its best is featured at the Panorama of European Cinema, the longest-living film festival in Athens that is held every year in autumn, as well as at the Festival du Film Francophone and the FeCHA – Athens’ Hispanic Film Festival that highlight the cinematic richness of these countries.
Every autumn, the Micro μ Festival projects a number of short films in one day, at the same time, in many different cities, while the Adventure Film Festival is the ideal event for those who love cinema and adventure outdoor activities. New digital media and cinema are in the spotlight at the Athens International Digital Film Festival, featuring films, documentaries, video art etc., while animated short films are featured at the Athens AnimFest and the Animation Marathon.

In the Saronic islands

Summer holidays in Attica’s islands with beautiful melodies by the sea, cinema under the starry sky and arts for all! The Saronic Chamber Music Festival presents a number of concerts with enchanting tunes every summer in Hydra, Spetses, Poros, Galatas and Methana, while the Poros Arts Festival floods the island’s neighbourhoods with music, exhibitions, cinema, theatre and dance every year in July. Music from all over the world in the most atmospheric island of Attica: Hydra World Music Festival takes place every two years and makes our summers in Hydra even more enchanting, while the Aegina Film Festival offers us majestic summer nights full of cinema under the starry sky.