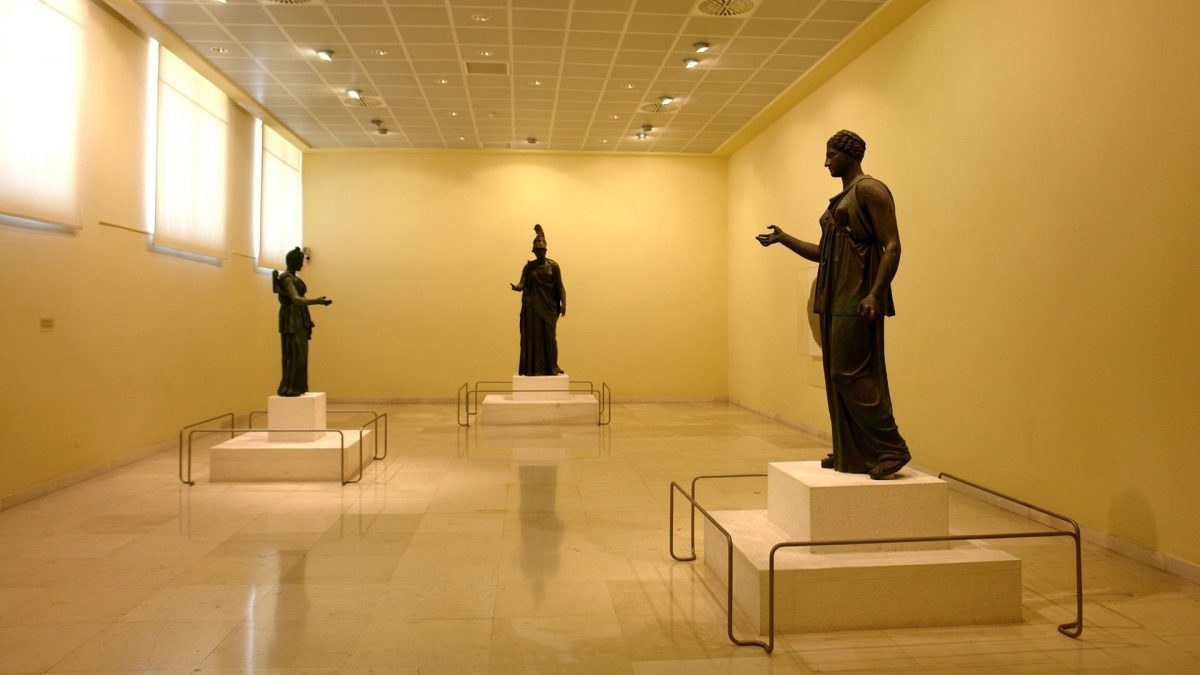 With exhibition space of more than 14,000 square meters (150,000 square feet) and a full range of modern visitor amenities, the New Acropolis Museum, designed by the Swiss-American architect Bernard Tschumi and just a few minutes’ walk from the Acropolis, will give you insights on how life developed on the Athenian Acropolis and its surroundings.

You enter the exhibition by an ascending, wide glass-floored gallery housing finds from the sanctuaries on the slopes of the Acropolis, as well as objects that Athenians used in everyday life from all historic periods. The occasionally transparent floor provides a view of the archaeological excavation, while its upward slope alludes to the ascent to the Acropolis.

In the nine-meter high, naturally lit “Archaic Gallery”, in the east and south sections of the first floor, you have the opportunity to walk around celebrated original works of Greek art of the pre-Parthenon period and admire the ethereal maidens with plaited hair. You will be fascinated discovering the stance and the motion of their body through the sculpted drapery of their fine linen chiton and their mantle-garments.

Ιn the glass-encased “Parthenon Gallery”, oriented to face the Acropolis directly on the hillside opposite, an installation with exactly the same dimensions as the cella of the Parthenon enables the visitors to view original pieces of its beautiful frieze and pediments.

Don’t leave the museum without seeing the elegant Caryatids carved in Parian marble and the masterpieces of temple of Athena Niki and in particular the ethereal winged victory binding her sandal.

In the lab of the second floor both children and parents have the opportunity to acquire interesting insights concerning ancient technology, the creation of artworks and the production of exact copies.

Educational programs for schools are available in Greek. Overseas schools – Greek schools abroad and foreign schools – can book for specific educational programs upon email request (learning@theacropolismuseum.gr) at least one month prior to the desired date of visit. These programs can be given either in Greek or in English, only on Friday.

Visitors with disabilities from both EU and non-EU countries and an individual accompanying them, are entitled to free admission on presentation of the required identification. Guide and assistance dogs are welcome inside the Museum. The Museum Guide is available in Braille (Greek and English) for loan at the Museum’s Information Desk.

Take a rest at the Museum Cafe and Restaurant, while enjoying the view of the Sacred Rock of Acropolis and its outstanding ruins. Every Friday the Museum is open until 10 p.m. and the restaurant is open between 8 p.m. and 12 midnight.

The National Archaeological Museum is the largest museum in Greece and one of the most important in the world, as it hosts finds from all parts of the Greek world and from all ages, from prehistory to late antiquity.

The 11,000 exhibits of its 5 major permanent collections attract the admiration and the interest of visitors, researchers, artists, authors and scientists. It is of course, hard to see all these objects in one day, but it is impossible not to stand admiringly before the amazing frescoes from the prehistoric settlement of the Thira: The Spring Fresco with papyrus and lilies growing amongst colourful volcanic rocks and swallows flying between the flowers, the Boxers Fresco with two youths boxing, the Blue Monkey Fresco, the Antelopes fresco etc. It’s impossible not to be attracted by the dazzle of golden masks, the selected gold, silver, stone and clay utensils, jewels of gold, glass and faience. All of them are funeral gifts found in the royal graves of the city of Mycenae and of Dendra.

In this imposing neoclassical building, built at the end of the 19th century in L. Lange’s Ernst Ziller’s designs, the Museum hosts, in addition to its permanent collections, major periodicals, and organizes various events and educational programs.

The Museum of Cycladic Art

The Museum of Cycladic Art consists of two separate buildings connected internally: the Main Building houses one of the most important and complete collections of Cycladic antiquities in the world, with representative samples of marble figurines and vases, bronze weapons and tools and ceramics of all Phases of the Early Cycladic period, while the Stathatos Mansion, one of the most important architectural examples of neoclassicism in Athens, hosts periodical exhibitions.

The Collection of Ancient Greek Art offers a panorama of the genre from the 2nd millennium BC to the end of the Roman period (4th century AD).

The Cyprus Collection is one of the largest collections of Cypriot antiquities in the world with more than 800 items. Thanks to the multimedia applications on touch screens with texts and pictures, the visitor draws useful information about Cypriot copper, history of writing and coins.

Participate with your family in the family programs and discover the secrets of the exhibits. You will learn “What stories do the Museum’s objects tell? What’s missing from Cycladic figurines? What does Cycladic culture have to do with the elements of nature? What is the connection between piglets and children, sports and the gods, ivy and merriment? What magical powers could a clay pot have? On which island did the ancient Greeks find the most valuable materials of their time? How were the days and nights spent in ancient Athens?”

The “Together in the Museum” program began in February 2016 and offers free workshops for children and adolescents aged 5 to 17 with learning and developmental difficulties, people with blindness, and people with Alzheimer’s. They are addressed either to schools that visit the museum before noon or to families that join the activities in the afternoon.

The Byzantine and Christian Museum of Athens

In the Byzantine and Christian Museum, situated in an oasis in the heart of the city, your visit begins in its delightful gardens where you will see three very important thematic exhibitions: the Well-Cistern, on how Athens was supplied with water from ancient times to the present, the Paradise, on the Byzantine concept of Paradise in life and the afterlife; and the River Ilissos, on the development of the fluvial landscape on the banks of the Ilissos from antiquity to modern times.

With over 25,000 artefacts in its possession, the museum is a veritable arc of Byzantine and post-Byzantine treasures.

The exhibitions at the Byzantine and Christian Museum can provide the whole family with a pleasant and creative leisure experience.

In its efforts to assure a pleasant and meaningful museum experience for a range of visitor groups, the Byzantine and Christian Museum stages thematically-organized interpretative tours of its exhibitions for groups of adults.

The central building of the complex, Villa Ilissia, a historic al mansion of 1848, serves as a venue for temporary exhibitions (usually two or even more are on show simultaneously) as well as for various artistic events.

Educational activities are adapted to the needs of different groups of people with disabilities.

Enjoy your coffee with a delicious dessert or have a light meal in the café-restaurant «ILISSIA» in the garden of the museum.