Evzones: the Presidential Guard and potent symbol of Athens, Attica and Greece! 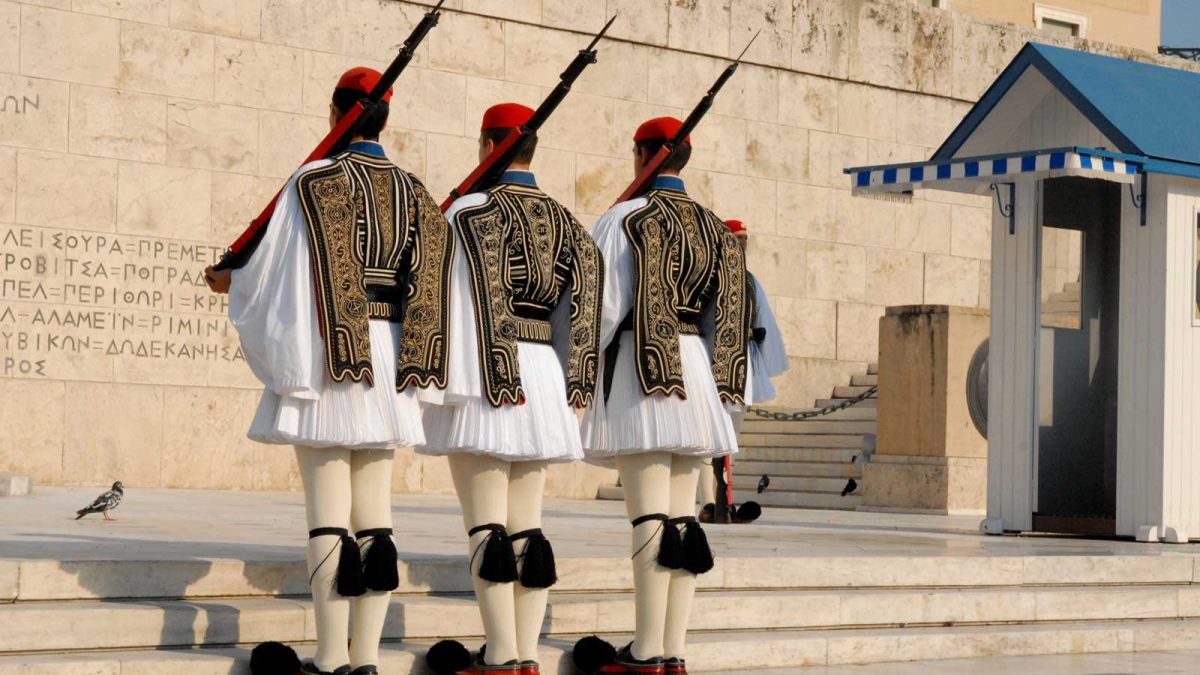 At the Tomb of the Unknown Soldier in Syntagma, on Vassilissis Sofias street, at the Presidential Mansion and on the Acropolis, the Evzones astound passers-by, both Greeks and foreign visitors of Attica, with their imposing stature, their perfectly tuned movements, their lofty pace, but above all with the look in their eyes, a sign of determination and strength. For 150 years, the emblematic Greek Presidential Guard has been the country’s highest guard of honor, a symbol of sturdiness, bravery and pride, representing Greece’s struggles for independence.

The official Changing of Guards ceremony

The official Changing of Guards ceremony takes place every Sunday at 11.00 am in front of the Tomb of the Unknown Soldier at Syntagma Square. At around 10.20 am, the Evzones units start marching down Vassilissis Sofias street, in perfect pace, heading to the Tomb of the Unknown Soldier, accompanied by a military band. While in Attica, this is an extraordinary thing to see. You will be utterly impressed and awe-inspired!

The “Evzones” (the word means “well-girt”) are elite soldiers of the Hellenic army. They were first formed as a regiment in 1867, and distinguished themselves for their fighting spirit during the Balkan Wars and all major battles and armed conflicts of the 20th century. As a result, the Evzones were conceived as heroes by all Greeks. In 1914, the then-called “Palace Guard” – predecessor of today’s Presidential Guard – was formed as a special unit.

The role of the Evzones

Today, the Evzones have a ceremonial role and their mission is to honorarily protect Democracy, pay tribute to all Greek heroes who were lost in battle, and maintain the Evzones tradition. Every minute, they try the limits of their stamina and patience, under any weather conditions and as long as the ritual requires. Their daily life is run by strict and precise rules, just like their training. No wonder only 50% of the soldiers selected to serve as Evzones eventually manage to complete the training and put on the Evzone uniform.

The Evzones stand as a national symbol of worldwide recognition and this realization is always in their mind when they are trained, when they pace, when they perform the official hoisting and lowering of the flag at the Sacred Rock of the Acropolis, when they stand still, silent and serious at the Tomb of the Unknown Soldier – a monument that is guarded 24/7, 365 days a year, and is dedicated to those who gave their lives and fought for the country.

In front of the Hellenic Parliament and the Monument of the Unknown Soldier, the Evzone stands completely motionless and, on top of that, he wears an extremely heavy and stiff outfit the whole time. He is not supposed to react, even in case of attack or threat. This is why the role of the officer is so important. It’s the soldier in standard uniform, who watches the guards all the time and is responsible for their safety. In emergencies, and in cases when the officer’s intervention is needed, the Evzone taps his riffle on the ground. The officer approaches and then the two of them communicate with the eyes, based on a secret code of subtle signalling.

Apart from the complete stillness, a great challenge for the Evzones is their characteristic pace, which is specific for each ritual and demands perfect coordination and synchronisation. The moves during the Changing of Guards are full of symbolisms. Raising and stretching the leg is “re-enactment” of kicking the enemy, when fighting in hand-to-hand combats. After the foot salutes the dead, it drops down forcefully and pushes backwards, pushing away 400 years of slavery that are now behind. The two legs being one next to the other symbolise the unification of Greece.

The Evzones’ uniforms differ, depending on the occasion, however they all have some things in common: they are made at the training camp by specialised craftsmen and tailors, they are handmade, always impeccable and immaculate, and full of historical, folklore and religious symbolisms. The types of Evzone uniforms are:

The main parts of the uniform

The colours of the Evzones’ uniform are there for a reason. White symbolises the purity of the Greeks’ struggles and red represents the blood that has been shed in battle. The black colour of the pom pom is a reminder of the 400 years of slavery, the black of the silk tassel is the tear of Christ on the Cross, while the black epiknemides represent the tears of the mothers who lost their children at war. The blue of the fringes symbolises the Greek flag.

Did you know that…