Hydra: as close to paradise as anyone could wish 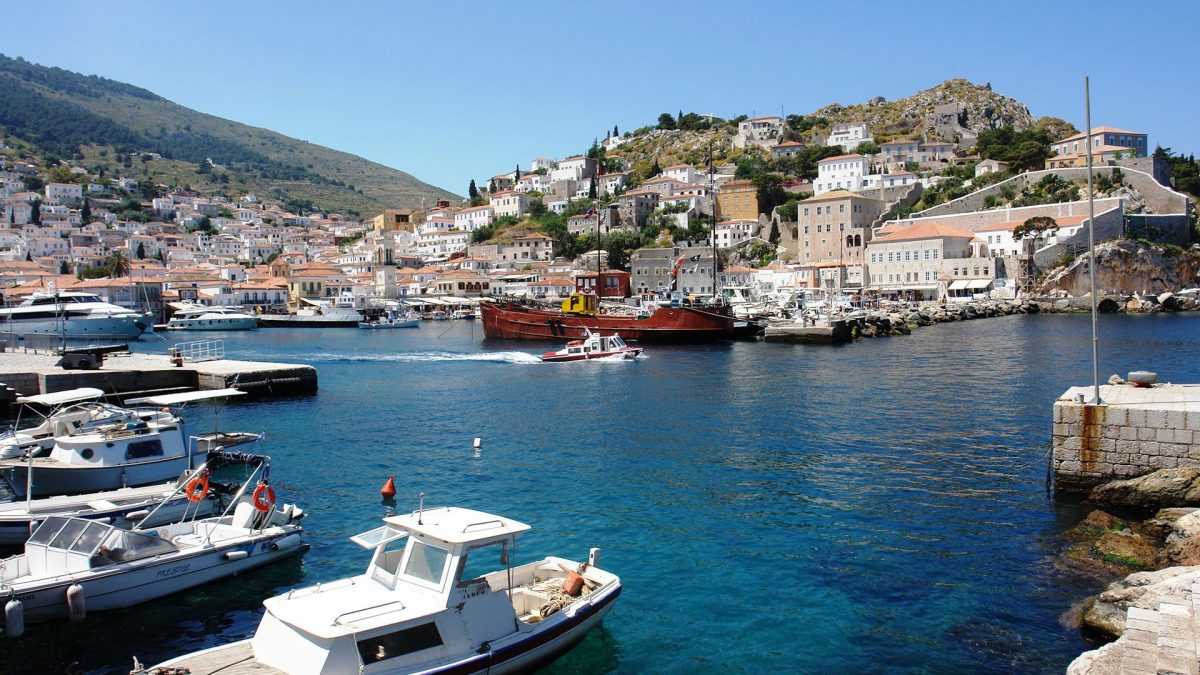 “Hydra is almost a bare rock … a living rock, a diving wave of energy suspended in time and space, creating a pause of long or short duration in the endless melody. The town, which clusters about the harbor in the form of an amphitheatre, is immaculate. …This purity, this wild and naked perfection of Hydra, is in great part due to the spirit of the men who once dominated the island.” — Henry Miller, The Colossus of Maroussi.

In Piraeus Port, embark on a flying dolphin that will take you, in one hour and a half, to the most renowned island of the Saronic Gulf, listed as an architectural reserve and combining cosmopolitan and traditional vibe: Hydra.

A tour in the town

Have a lovely stroll in the narrow cobblestoned streets and discover churches and quiet squares with pretty taverns and cafes. The only means of transportation you will meet are donkeys. You can visit Hydra on a horseback or on a donkey back; you will see its beauties in a new light.

Visit the 17th century Hydra’s cathedral dedicated to the Assumption of Virgin Mary. You will be impressed by the marble temple and the frescoes of the 18th century.

On the waterfront, admire the traditional stone sumptuous mansions, hosting nowadays museums and academic institutions, the canons, the old gunpowder store and the photogenic Hydra’s cats.

A journey into the past

During the Greek War of Independence (1821-1829), the ship owners of Hydra participated with their powerful fleet, transformed to a navy, in crucial naval battles and after the end of the war, many of them (such as Andreas Miaoulis, Georgios, Lazaros and Pavlos Kountouriotis) served the Modern Greek State as presidents, prime ministers, senators and admirals.

Historical archive-Museum of Hydra: It showcases rare archive material related to the history, tradition and culture of the island from 1708-1865. Marvel at the famous Hydra scarves, creations of the female culture and sensitivity in the house of Lazaros Kountouriotis, an annex of the Museum.

Museum of Post-Byzantine Art and History of Hydra: Housed in the mansion of Georgios Kountouriotis, the museum exhibits personal artifacts of the Kountouriotis family, as well as objects from the modern history of the island.

“I will never forget Hydra… one of the most beautiful places in the world,” says Sophia Loren, starring in Hollywood film Boy on a Dolphin (1956), which was shot in Hydra and helped the island to turn into a highly artistic centre and a meeting spot for renowned writers, painters, actors and jet-setters.

Hydra hosts exhibitions, concerts, theater and dance performances throughout the year, with the participation of distinguished artists from Greece and abroad.

The legendary songwriter, poet and painter Leonard Cohen spent 7 years of his life in Hydra and he always returned to the island “in order to have a nice time”, as he used to say, “in this tiny paradise”. In June, his friends organize with the Municipality of Hydra a touching meet-up in his memory, don’t miss it!

In October, taverns and bars thrive at the rhythms of rebetiko – the Greek urban folk song – as musicians and singers from all over the world come together in order to participate in the Annual Rebetiko Festival.

Go for a swim to Mandraki, an organized beach with excellent water sport facilities, or else to Bisti, a pebbly beach, where Hydra Diving Centre organizes water sport activities such as diving and kayaking. Tan-seeking sunbathers prefer Spilia and Hydroneta beach, while hiking fans like the turquoise water of Limnioniza beach; it takes two hours hiking in order to reach it. If you are a fan of sandy beaches, choose Palamida beach or the beach of Kaoumithi. Saint Nicholas is a nice cove well protected from the winds, no matter their direction. It has amazingly clear blue-green waters, pine trees, sun decks and umbrellas with tables and a beach bar with beverages and light meals.

Explore the wild beauty of the island; wander through the unique mountain paths, the picturesque lanes of the traditional town and have a splendid experience participating the first weekend of April in one of the most popular trail running events Greece: The Hydra’s Trail Event with five different races promising intensity and a lot of action. The originality of the weekend comes from the fact that it is the first downhill race in Greece to be held Saturday at noon.

From 17 to 19 November 2017, the TriMore team in conjunction with the Municipality of Hydra and the Hydra’s Nautical Club organize the Swim Run Hydra, a multiple-stage competition which involves participants running and swimming over a cross-country race.

Every summer groups of sailing boats moor at the harbor, where they are joined by dozens of sensational motorboats and yachts.

On this tiny island everything happens in a minor scale. Feasts and festivals make everyone feel at home. You will have the opportunity to share this experience in every kind of celebration: from the festive season (Christmas, New Year) and the blessing of waters at Epiphany, to the celebration of the Blooming Almond Tree in February. During the famous carnival parade, when the participants eat, drink and have fun all together with an unimpaired conviviality to the spectacular burning of the effigy of Judas on Easter Sunday and many others.

The impressive Miaoulia event (in June), in honor of Admiral Andreas Miaoulis, a hero of the Greek war of Independence (1821), commemorates the significant victory of Greek naval forces commanded by Miaoulis, over Ottoman navy (Naval battle of the Gulf of Gerontas). It is an experience not to be missed. The festivities culminate in a breathtaking spectacle with a reconstruction of the torching of the Ottoman flagship followed by great fireworks.

In the last decade of August, the Municipality of Hydra honours another important person of the political and maritime history of Greece: Pavlos Kountouriotis by organizing the Kountouriotia, a six-day event with theater and dance performances, including since 2017 the World Music Festival featuring artists from all parts of the planet.

The countless bars and restaurants spring into life and continue serving drinks and food well past 5.00 am. Even the shops are often open till almost midnight.

Don’t leave the island without taking home with you the delicious “amygdalota”, (almond cookies flavoured with rose water and dusted with icing sugar) and some branches of its fabulous sage!