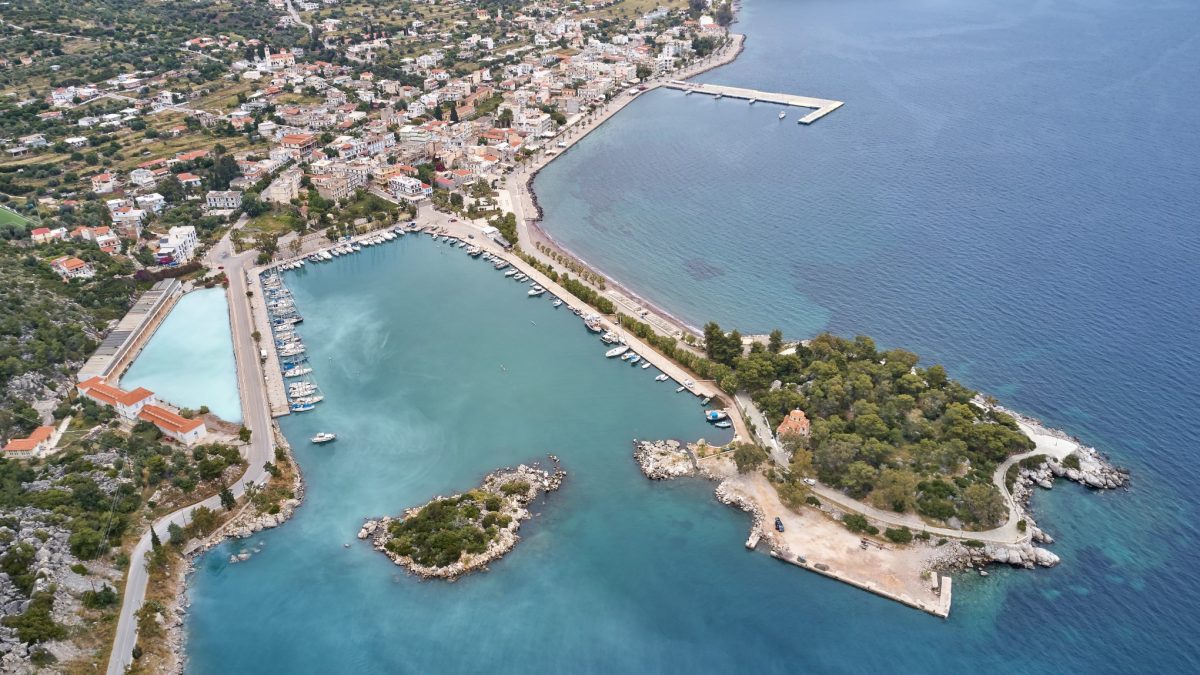 Visiting this land is like travelling back in time. Centuries ago, with interlacing pictures, memories and experiences, it results in a complete imprint of the geological, spiritual, historical, cultural and civil heritage in Greece. Like a novel, that keeps the reader’s interest going on till the last page… 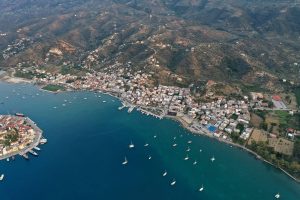 The condensed trail of experiences starts from Galatas, the seat of the Municipality. A strong earthquake took place around 400 AD which left the area with a narrow sea canal and theoretically “separated” Galatas from the island of Poros. In reality, a unified visual masterpiece was created, allowing boats and small vehicle-carrying vessels to travel back and forth, thus completing a magical scenery.

In the land where everything is “artfully created”, well-hidden geological treasures are not amiss. “Diavologefyro” (the Devil’s bridge) stands up as a favorite canyon among trekkers and well-informed pilgrims. The river, huge plane trees, lakes with crystal clear waters and a small bridge that connects awe-inspiring rocks with goat’s tracks, (others consider them as the Devil’s or as Pan’s footsteps (Pan – a secondary Greek deity with billy goat legs) …, all compose a scenery taken from myths and fairytales…

The torrent of Diavologefyro ends at the Wetland of Psifta, which according to a decree of the Ministry of Culture’s in the Government Gazette is marked as a “location of excellent natural beauty”. The area serves as a resting and replenishing stop for migratory birds and is a significant refuge for hibernating species, whereas more than 89 bird species from 34 different families have been registered. 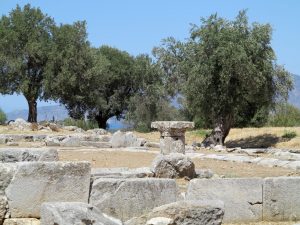 The numerous archaeological findings, uniquely narrating a long history, form an integral part of this “paradise on earth”… Historical Troizina (Troezen) has a protagonist’s role. The visitor, like a tracker in long gone centuries, encounters the Stone of Thisea (Theseus), the Temple of Ipollytos (Hippolyte), the Asklipieio, the remains of the City’s Walls (dating back to the 4th century B.C.), the two grand Towers of the 3rd century B.C., the remains of the early Cristian Temple of the Old Diocese, as well as the location where during the 3rd National Assembly of 1827, Ioannis Kapodistrias was elected as the first Governor of Greece, and the “Political Constitution of Greece” was voted.

The inculcation of the acne that Mycenean Troizina (Troezen) enjoyed, unfolds in every step. The three Royal Domed Tumbs of the Mycenaean era and the mid-Hellenic Acropolis in Magoula that refer in a time period before the Trojan War, the natural harbor of Pogonas –the war port of Troizina (Troezen) (today known as Vidi)- which accommodated part of the Hellenic fleet before the naval battle of Salamina took place, the remains of the archaic temple of Artemis of Saronias and the “Sunken City” in Psifta, scattered burial findings, are some of the innumerable “traces” of a different era, which vibrated even the most sensitive chords in the mind and soul of every lover of archaeology.

Upon entering the inland of the semi-mountainous section, and crossing the silver olive grove landscapes and lush green plains, we come across the settlements of Karatzas, Agia (Saint) Eleni, Choriza and Evangelismos. Going down the slope we encounter the settlements of Dryopi and Ano Fanari, with traditional stone-built houses and the “natural balcony” from which one has the feeling that he or she will reach out and touch the Saronic Gulf, the Gulf of Epidaurus, Aegina, Agistri, Piraeus, Troizina (Troezen), Methana, Poros, and San Tzortzis islet. The mountainous rising mass of Ortholithi or Koimomeni, -shaped like a woman lying supinely with knees slightly raised- fills the viewers with awe. Forever engraved in the memory and the soul of every viewer, is watching the unfolding of the magical sunset behind Koimomeni, with its magenta and yellow colors creating an idyllic image before one’s eyes.

A true work of art is timeless… Nisiza, Neratziza and Mylos, with their crystal blue-green waters and pebbled creeks. Votsalakia, the enchanting beach with transparent turquoise waters and light colored, rounded pebbles spread underneath of awe-inspiring rocks, with a traditional canteen that the Guardian considers one of the top-10 canteens in Greece. Kalloni with its warm and clean sea and the lush green nature, filled with the erotic aromas from the cultivation of flowers and citrus trees. Psifta with sand, pebbles and clear blue waters, the beaches of Melissi, just below Metamorfosi settlement, Dardiza, Xirolimni, Agios (Saint) Nikolaos and Akti tis Agapis (Coast of Love), below Taktikoupoli settlement, innumerable anonymous and well-known creeks, all compose an art painting with bluish green brushstrokes…

This blessed land offers an abundance of oil, citrus fruits, fruits, potatoes, wine, livestock products, honey and plenty of fresh fish. The easy and quick access, the hospitality of the locals, the ever-developing touristic infrastructures, the small taverns which cater the needs of the most demanding palates, all make this area even more attractive.

Similar to a circle, where each point is at the same time a beginning and an ending, each particular piece of this land is the beginning and the end of a unique hands-on experience. 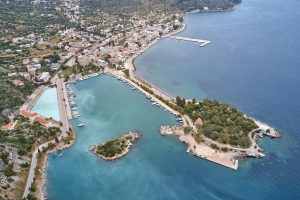 The peninsula of Methana has deep geological and historic roots. Its beginning, middle and end does not follow a linear pattern, it cannot be chartered with consistency. It is a place connected to its volcano. According to Pafsanias, the volcano first erupted around the beginnings of 3rd Century B.C., and the apparition of its thermal springs followed the eruption. Around 30 craters can be located in the area, which in connection with the volcanoes in Milos, Santorini and Nisyros form the volcanic bow of the South Aegean sea.

The needs of the most demanding nature loving trekker can be met through the 60 km of marked trails, engraved in lava, which alternately cross natural landscapes, pine forests, crystal clear waters, sandy beaches and rocky bays with their characteristic red, grey and black pebbles.

The spring festivals with their unique cultural impression, the affability, the culture, the quality and the hospitality of the locals, the spotless coastal accommodation facilities, the fresh fish and seafood dishes, the local wines, the fragrance of the aromatic oregano, the mouthwatering figs and almonds, all lead towards unique gastronomic itineraries and cultural paths. Overall, they make for an ideal destination for unprecedented hands-on escapades.

The total harmony of the wild natural beauty and the human factor starts from the exquisite Castle of Favieros (Faviere), built on the ruins of an ancient fort from the French general, who organized there the First tactical army of the new founded Hellenic State.

Next follows Loutropolis with its volcanic pool of sulfur spilling to the sea. The imprint of an incandescent memory that continues to brand the location is the thermal waters, with a plethora of valuable components, trace elements, metals and minerals. In the east, lies the verdant Agion Anargyron islet, a small peninsula, with remains of ancient fortifications, traces of 6th century B.C. Cyclopean walls, the Agion Anargyron church, and a perimeter backstreet, ideal for romantic walks that ends at the beach of Limniona, with pine trees, fine sand and blue-green waters.

Continuing our tour, we can see Agios Georgios, with its sunken concrete German naval ship from the 2nd World War, which is actually now a part of the small harbor’s jetty, and Agios Nikolaos, with Pausanias’ Baths, the world’s richest spring in silicic acid, sulfuric water at 29 degrees Celcius, ideal for the treatment of gynecological and dermatological diseases.

Ascending through pine forests, volcanic craters, deserted windmills and byzantine chapels, we reach the semi-mountainous settlements of Kypseli, Agious Theodorous, Kounoupitsa, Palaia Loutra and Makrylongo, enchanted by the view of the islands Aegina and Agistri.

In the foothill of the most famous crater of the volcano, lies Kaimeni or Kameni Chora, built on volcanic rock, with some of its houses equipped with internal holes on the volcanic slope, with a steady temperature of 16 degrees Celsius, which are used for preserving food, wines, etc.

Megalochori and Megalopotami offer views to Epidaurus bay, whereas by the coastline we encounter Vathy, the picturesque fishing village, with its natural harbor, safe from winds, and a unique sunset, with the magenta and yellow colors behind the mountains of Koimomeni. In the western tip of the peninsula, transforming the scenery into a painting lies Krasopanagia, the chapel that according to legend, was built by earth and wine, on top of the steep grey rocks.

Completing our pilgrimage, we come across Palaiokastrou Hill, with the remains of the Acropolis of the ancient city of Methana and the underwater remains of the Sunken City finally reaching Peristera’s Cave, dated 2,5 million years, that comprises three consecutive halls filled with water, with the middle one hosting a rare bat species.

Touring the peninsula with its harmonious combination of innumerable heterogeneous elements, consist an incomparable trip to nature, history and geology, a demanding equation for problem solvers and well-informed travelers…