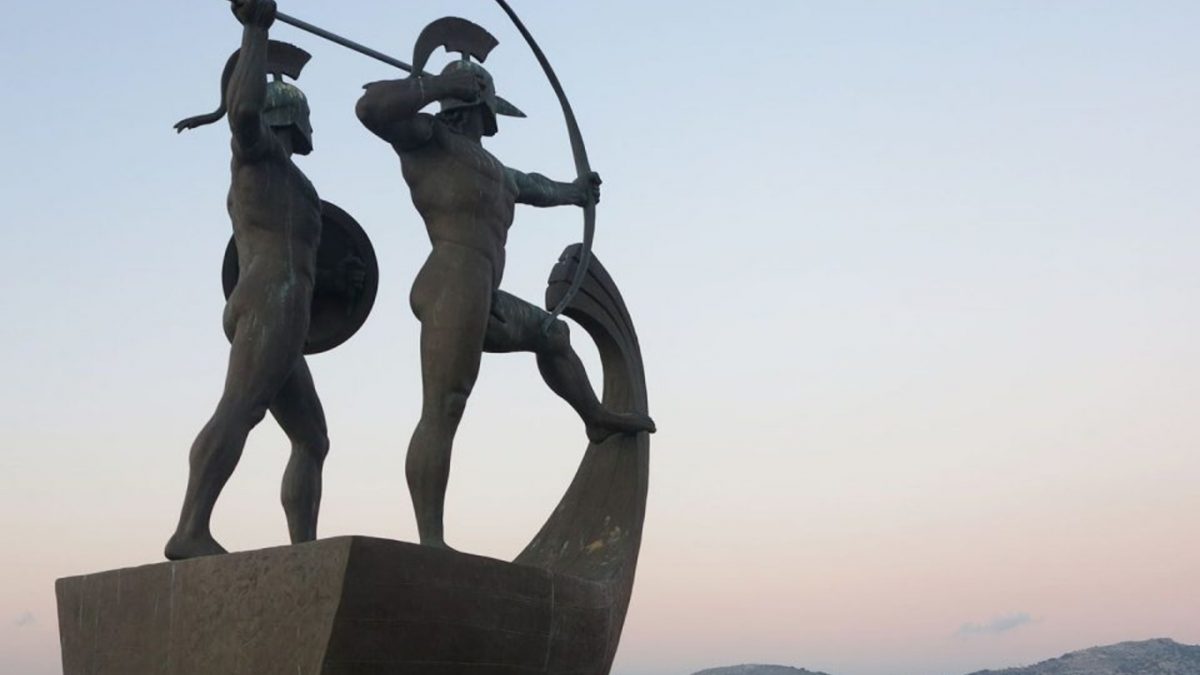 On the occasion of the 2500-year anniversary since the legendary Battle of Salamis, we set out on a tour on the biggest island of Attica, accessed in just 15’ by ferry from Perama or in 45’ from the port of Piraeus. A tour full of history and well-hidden secrets that await to be discovered. Because Salamina is not a destination that… “unfolds itself” to the visitor from the very first minute. It is a destination for “sophisticated” travelers, for those who study the destination before they travel and pin down the points of interest they will visit, the experiences they will live.

Well-preserved and extraordinary, the monument in Kolones – at the southernmost point of the island – is definitely worth visiting. It is a circular burial monument (4th century B.C.) of a prosperous family that encloses four tombs. The monument also features a stone pedestal on which a sculptural composition was placed, as a graves “signal”, visible even from the sea.

2. The Cave of Euripides

Born in Salamina, the great Greek tragedian Euripides frequently chose to withdraw in a cave situated between Peristeria and Kolones, in order to write his plays. From the parking space, take the path that leads to the cave after a 20-minute hike. The location is simply majestic! The pine forest and the endless sea being a feast for the eyes.

A visit at the Riding Club of Salamina is a “must”, especially if you love outdoor activities. In the heart of the vast pine forest, near the monastery of Agios Nikolaos Lemonion, you will ride horses, take riding classes, and even jump obstacles if you are experienced riders. Children will be absolutely thrilled with the ponies, while there is also a café available for those who wish to relax and enjoy the view that reaches all the way to Agistri and Aegina.

Sea lovers, too, have every reason to be impressed in Salamina. Enjoy the wonderful underwater world of the island under the guidance of the certified diving centres available. Snorkelling, underwater tours, diving classes, boat trips for certified divers and diving classes for people with disabilities. The experienced trainers will be your companions in this enchanting “journey” in the sea of Salamina.

Don’t miss out on the opportunity to try the typical local delicacies of the island, such as the “platetsi” (oil bread with or without feta cheese), the “kougoulouari” (rolled phyllo dough with pumpkin and raisin filling), the “tiganites” (round dough fritters) and the “loukoumades” (small round doughnuts topped with honey). Salamina is also famous for its fresh fish and seafood, such as octopus, squid, cuttlefish, shrimps and crayfish, served at the tavernas and restaurants by the sea.

6. The house of the Greek poet Angelos Sikelianos

Right by the sea, opposite the Faneromeni monastery in the northwest side of the island, you will find a charming whitewashed house with blue doors and windows. This was the retreat of the great Greek poet Angelos Sikelianos, where he spent the last years of his life with his wife, Anna, finding inspiration in the beauty of the landscape. Visit the site at dusk to enjoy the majestic colours of the sky and take a tour in the building to see the exhibited items of the couple’s common life in this house.

The island’s Archaeological Museum is housed in the building of the former Kapodistrian Primary School, one of the most stunning buildings in Salamina town, the construction of which began in 1826 and was completed in the period 1829-1831. The Museum features the history of Salamina and the entire region of Attica, presenting archaeological finds from the Late Neolithic Period until the Byzantine Period. Pottery, figurines, copper objects-grave offerings, stone tools, as well as a great collection of tomb and votive reliefs.

Salamina is filled with churches, each with its own unique architectural and historical value. Two of the most remarkable churches on the island are Agios Minas, the cathedral located in the centre of the town, and Agios Dimitrios, which features the tomb of Georgios Karaiskakis, the famous Greek military commander and leader of the 1821 Greek War of Independence, whose last wish was to be buried in the church of his patron saint. Both churches boast magnificent works by the renowned Greek sculptor Yannoulis Chalepas (1851-1938). Make sure you also visit the historical women’s Monastery of Agios Nikolaos Lemonion, built on the hillside of a forest, offering panoramic views of the sea!

In the town of Aianteio look out for an imposing millennia-old olive tree, known as “Orsa’s Olive Tree”, since it has been associated with the legend of a young girl who lived in the 17th century. The central trunk has a perimeter of 5.7 metres, and is surrounded by six more big trunks. A recent scientific study confirmed that the tree is over 2,500 years old and was probably planted during the rule of the tyrant of Athens, Peisistratos. It is one of the few remaining samples of the ancient Athenian olive grove, a tree that was growing during the time of the Battle of Salamis, the Parthenon and the domination of Athens!

The tradition, the daily life and history of Salamina in a museum. Here you will marvel at a stunning collection of men’s and women’s local costumes that testify to the wealth, the variety and aesthetics of the time on the island. Furniture of past eras, household items, tools and weapons used during the 1821 Greek War of Independence are some of the very interesting exhibits of the museum.