The Aegina Pistachio – the gastronomic treasure of Attica! 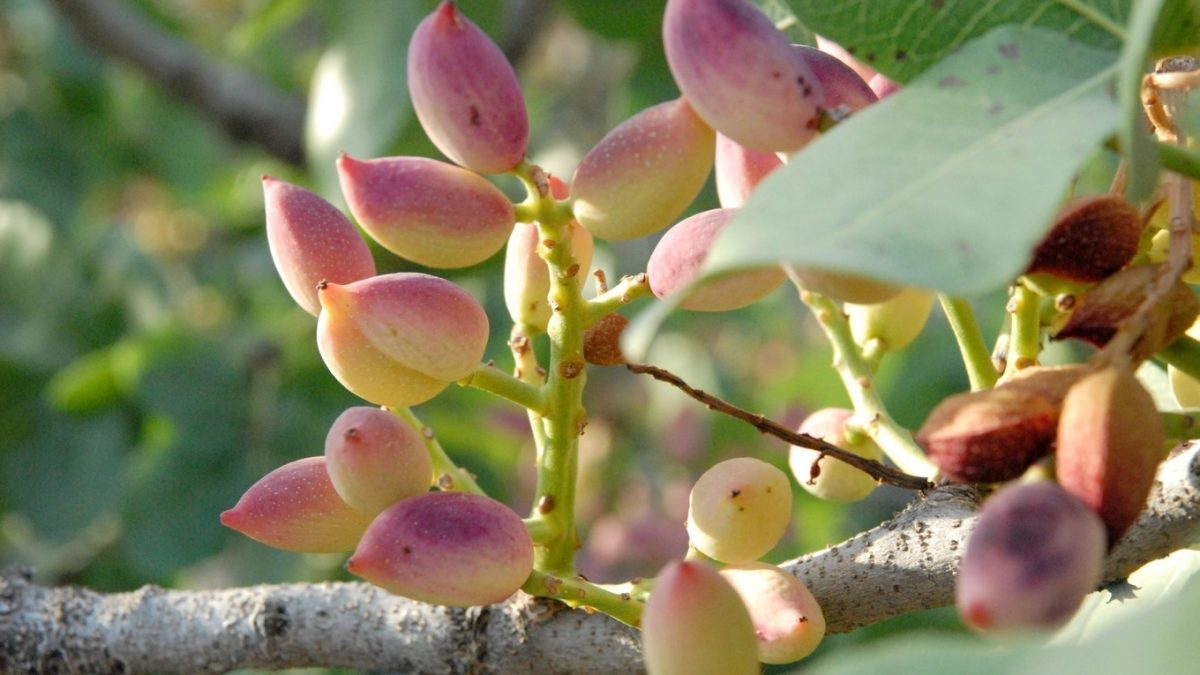 It has a delicate flavour and fine aftertaste. It stands out for its quality and is considered the best in the world. It is a superfood and true treasure for our health. It has its own festival and is the “king” of an entire island. It is the Aegina pistachio (fistiki), the variety with the unique fruits that has been connected with the history, the tradition and the life of people in Aegina.

Aegina is the first place in Greece where the pistachio tree was cultivated in a systematic and organised way, thriving as the main crop of the island. It is not certain when the pistachio tree first arrived on Aegina, but it is widely believed that it came to the island from Persia, in about 1867. The first organised pistachio tree grove was recorded in Aegina in 1896, while the Historical Archives of Aegina feature a document dated on the 30th of September 1898, which is referred to a transaction of 12 okes (old weight unit in Greece) of pistachios between two residents of the island.

From Aegina, the cultivation of pistachios spread all over Attica, in areas such as Salamina, Megara, Koropi and Markopoulo, as well as in the rest of Greece.

In 1947 the Aegina Agricultural Cooperative of Pistachio Producers was founded, still being in operation to this day. It collects, processes and trades 30% of the Aegina pistachio production on behalf of its members.

It is in Aegina that the fruit processing and tree propagation techniques were developed. The fruit was called “Fistiki Aeginis” (Aegina Pistachio), while the variety that is cultivated in Greece was called “Aegina” or “Aeginitiki”.

The year 1994 was exceptionally important for the Aegina pistachio, since it was classified as PDO (Protected Designation of Origin). In 1996 it was recorded as PDO product in the Official Journal of the European Union.

The superiority of the product

How did the Aegina pistachio become a PDO product? Since the “Aegina” pistachio variety spread all over the country, the distinction clearly lies on the special features and the superiority of the product. And this is due to a rare combination of factors: the dry and warm climate of the island, and the low humidity even at night (which is rare for an island); the proximity to the sea and the relative salinity of the irrigation water; the semi-dry cultivation on a relatively barren, calcareous soil; the relatively small size of the trees, the low annual growth and production. These factors, in combination with the natural drying process of the product, give the Aegina pistachio its superior flavour and international reputation and recognition.

A total of 3.5 square kilometres with 120,000 pistachio trees are cultivated on Aegina today, which produce the famous Aegina pistachio. The daily life, the sustainability of the mainland, the customs and traditions, the national characteristics and the culture of the land are closely linked with the cultivation of the pistachio on the island. An important fact is that despite the development of tourism, trade and services, a large proportion of Aegina’s population still work in agriculture, primarily in the cultivation of the pistachio.

When it comes to quality and flavour, the Aegina pistachio is one of the best nuts in the world. It is consumed fresh or roasted, with or without salt, and is widely used in pastry recipes. It is a superfood of high nutritional value, a small portion of which contains an extraordinary number of healthful ingredients. The Aegina pistachio is considered a “multi-coloured” fruit, due to the green- and purple-coloured antioxidants it contains, which protect us from aging.

A small portion of 25 grams is rich in nutritional substances and provides 10% of our daily needs in protein, fiber, magnesium, thiamine and phosphorus. The Aegina pistachio is also an excellent source of vitamin Β6, copper, manganese and potassium. It is good for the heart and the eyes, it lowers cholesterol and helps relieve stress.

The Aegina pistachio has its own special event, the Aegina FistikiFest, one of the greatest cultural and gastronomic festivals in Greece that is held every year, in September.

The pistachio is closely bound with Aegina and the life of its people. It won everyone’s hearts and made the island travel throughout the world. A feast of unique flavours, which is the main ingredient for many extraordinary delicacies. Had that pistachio tree not arrived here in the 19th century, Aegina would not have been the island it is today…