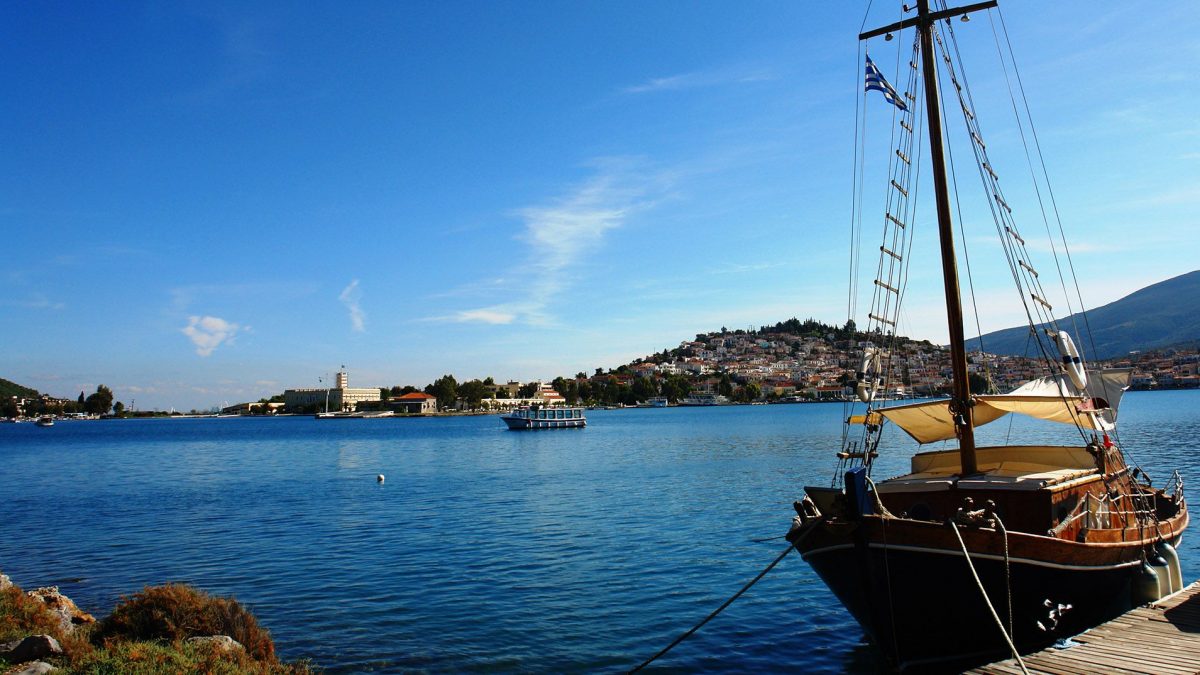 Tourism in Salamina, Poros and Spetses

Just a stone’s throw from the coast of Perama, internationally known for the famous naval battle that took place here in September 480 BC, during which the Athenians made a remarkable victory against the Persian naval forces, birthplace of Euripides, last of classical Athens’s three great tragic dramatists, Salamina welcomes a wide range of visitors.

Some people prefer Salamina for quiet family vacations or for a day trip.

Its beautiful beaches: Selinia, Kanakia, Saterli, Kiki Vigla, Psili Ammos, Solar, Ai-Giorgis, Vassilika and the two organized Municipal beaches of Zephyros and Spithari, near the homonymous capital of the island, host, from spring to late autumn, swimmers and fans of water sports.

Crowds of worshippers flock to Salamina each year on August 23rd to celebrate the feast day of the historic Panagia Faneromeni Monastery. The monastery, founded in the 18th century, is a great religious pilgrimage, but also a great architectural monument, since it constitutes the first “classicist” attempt to shape a church facade in the Greek religious architecture. Many pilgrims come on November 12th, when the Church celebrates the memory of St. Minas, the patron saint of Salamina.

History and literature lovers are looking for the traces of Ajax the Greater on the Mycenaean Acropolis in Kanakia, the steps of Euripides in the Euripides Cave above the cove of Peristeria. They visit the Archaeological Museum. They stand astounded at the size of the «Orsa’s olive tree» dating, according to experts of the Klorane Institute, from the same period as the famous naval battle, whose anniversary is celebrated with great splendor every year in the last ten days of September, with rowing races, concerts and re-enactment of the naval battle with a grandiose ceremony and fireworks.

Good food aficionados come to the picturesque taverns of the island to enjoy fresh fish and delicious seafood at great prices and with a great view of the Saronic Gulf.

A strip of seawater separates Poros from Galata on the Peloponnesian coast. Visitors arrive here either by ship from Piraeus (1 hour 15 minutes) or by car from Athens to Galatas and from there by a small ferry or boat (total travel duration of 2 hours). They are searching for serenity in an island, which, the world acclaimed Greek poet George Seferis, winner of the 1963 Nobel Prize in Literature describes it as filled with “idleness, sensual temptation”, in short, “a place for distinguished international lovers”. Its allure, draws in many distinguished Greek and international personalities through the years, who visit Poros to find tranquility and private atmosphere in its welcoming accommodations.

The historic “Villa Galini“, built by local red stone, hosted Eleftherios Venizelos the eminent Greek leader of the early 20th century, and Yiannis Tsarouchis, one of the most important representatives of the Greek “Thirties Generation”, painters. Marc Chagall immortalized Poros with its clock tower, in a blue and purple background, and with a yellow sun (http://www.marcchagall.net/the-sun-of-poros.jsp). The American writer Henry Miller came here searching for the “world of light and beauty,” the same “light along with another type of human communication” and discovered on the island the painters John Craxton and Lucian Freud who were hosted at the Mastropetro House in 1946, (a memorial plaque on the facade of the beautiful mansion reminds their stay in Poros).

Wander through the picturesque lanes with the well-preserved neoclassical and traditional houses.

Go for a swim in the crystal clear waters of Poros coves and do not forget to visit the famous beach of Neorion, where Seferis wrote the poem “Arnisi” (Denial) or “sto perijali to krypho”, which, set to music by Mikis Theodorakis, became an global popular song.

Take a stroll through Galatas’ Lemon Grove with 30,000 lemon trees and orange trees and the heady fragrance of their flowers in the spring.

The island of Daskalio with the shipwreck of “Kichli” in its waters, which inspired Seferis’ homonymous poetry collection, has been renamed in the early 21st century “Eros” thanks to its heart shape and to the fact that in recent years it has become an important wedding and christening destination venue.

Ancient History aficionados should visit the ruins of the temple of Poseidon in Calavria to pay tribute to the great orator Demosthenes, who persecuted by his political enemies, the Macedonians, fled to Poros and sought sanctuary at this temple. When his persecutors entered the sanctuary, he committed suicide in order to avoid a disgraceful death.

The faithful come for a pilgrimage to the historical monastery of Zoodochos Pigi Kalavrias, a welcoming monastery in a lush landscape with spectacular views on the sea and beautiful beaches nearby.

And don’t miss the great opportunity to taste the charcoal-grilled octopus, the delicious fresh fish, the lobster spaghetti and the spoon sweet of lemon.

A cosmopolitan, pine-covered island with splendid traditional architecture and majestic mansions is one of the top travel destinations thanks to its discreet beauty and the fact that the visitors have numerous opportunities for relaxation, fun (in its famous nightclubs) , alternative activities, aesthetic pleasures, shopping, culinary excursions, weddings, nostalgic trips and romantic meetings. “There is no man who will not enjoy the holidays on this island,” declare the celebrities after their visit to the island.

With a history dating back to 2.500 B.C. (according to the excavations’ data) and the glorious past of the 19th century (the Spetsiots’ navy played a leading role during the War of Independence in 1821), Spetses Island knew how to maintain its traditions and enter the modern times without losing its identity.

You can reach the island by many means of transport, by a Flying Dolphin from Piraeus (a two-hour trip), by car to Costa (3 hours away from Athens) and from there by ferry, boat or sea-taxi to Dapia. Other options are the use of a private yacht or even a helicopter. There is a heliport on the road from Agia Marina to Agioi Anargyroi.

You can start your day enjoying a coffee and a fine almond cookie (amygdaloto) in Dapia, over the historic cannon.

Take a stroll through the luxury shops near Dapia and at the Clock Square. Visit the home (now a museum) of a great woman and heroine of Greek Independence, Laskarina Bouboulina. One of her descendants will guide you to this wonderful 17th-century mansion and tell you stunning stories. In the summer, its picturesque courtyard hosts a Cultural Festival, with dance, jazz, classical music, opera and theater.

Get onto one of the horse-drawn carriages of the island and go to see the sunset at the Palio Limani (Old Harbour), where you will be impressed by the old but still active traditional shipyard (Karnajo in nautical and local jargon). The best way to conclude your visit to the Old Harbour is to enjoy a good meal in one of its restaurants tasting their delicious recipes.

Take a pleasant stroll on foot and marvel at the magnificence of the legendary Poseidonion Hotel and the imposing building complex of the historic Anargyrios and Korgialenios School.

Spetses is cyclists’ paradise as cars are not permitted in the town, the relief of the island is relatively low and the roads’ condition is pretty good.

The scenic beaches are ideal for relaxation and comfortable swimming: Agia Marina, Kouzounos, Xylokeriza, Agioi Anargyroi, Vrellos, Scholes, Zogeria are waiting for you with crystal clear waters, pines, pebbles or sand. The “Bekiri Cave” at the beach of Agioi Anargyroi, also known as “Erotospilia“, fascinates both young and old.

A number of sporting events bring together sports fans.

The Spetsathlon consisting of Triathlon Race (swimming, bicycle, running) and Cycling Race (25 km complete round of the island) is held in May.

The “Spetses Classic Yacht Regatta” with traditional open boats is organized every year in September.

The incurably romantics choose the Classic Car Spring Rally in April and the Tweed Run season bicycle, in April too.

Hundreds of visitors arrive on the island for the great Saronic Chamber Music Festival in August and for the great feast of Armata in September, celebrating the memory of the 1822 naval battle of Spetses.